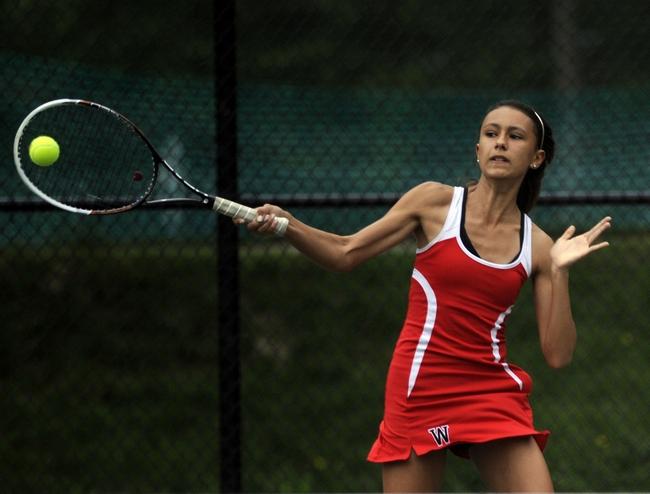 As a freshman, she quickly proved that she belonged, helping guide the Raiders to the state tournament with a 15-3 overall record and a perfect 12-0 mark in the Bay State Conference.

Individually, Avery was dominant, posting an 11-1 record after jumping right into the fire at the most competitive spot on the team’s ladder at first singles.
For her stellar efforts, Avery was named the Bay State Conference MVP in her first year of high school.

“I am pleased with my performance this season,” said Avery. “I wasn’t sure what to expect in high school tennis. The competitors in this high school league exhibited good sportsmanship, which is a very important aspect of any competitive sport.”

Avery’s tennis career began at a very young age, when her parents gave her a racket at age 2. She played with her parents at public courts and by age 6, she participated in tennis clinics at the Longfellow Sports Club in Natick. Avery soon joined the New England Academy of Tennis and competed in United States Tennis Association tournaments by age 9.

“My parents introduced me to the game,” Avery said. “They were a big influence on me wanting to play. I wanted to be on the court with them. In addition, I would watch professional tennis on TV which motivated me to want to play the game.”

Avery had to put in a lot of hard work to reach the level she’s achieved so quickly in her high school career. She trains twice a week at the New England Academy of Tennis, also in Natick, and has one or two weekly private lessons from coach Kip Rogers, who has made a lasting impact on her.

“I’ve learned that you can’t achieve your goals by just wishing and hoping,” Avery said. “As my tennis coach, Kip Rogers, said to me, ‘There are dreamers and there are doers.’ You have to be willing to work hard and stay focused on your goal and not let minor setbacks deter you from reaching your goal.”

Once on the court, Avery tries to visualize the match and let her competitive drive take over.

“I love the competitive aspect of the sport,” she said. “It’s a one-on-one battle. Each match is different and presents a new challenge every time you step on the court.

“I usually develop a game plan for how I envision I would like to play the match. I try to stay focused on the plan. Sometimes I deviate from this plan, but on the changeovers, I refer to my notes to remind myself of what I need to focus on.”