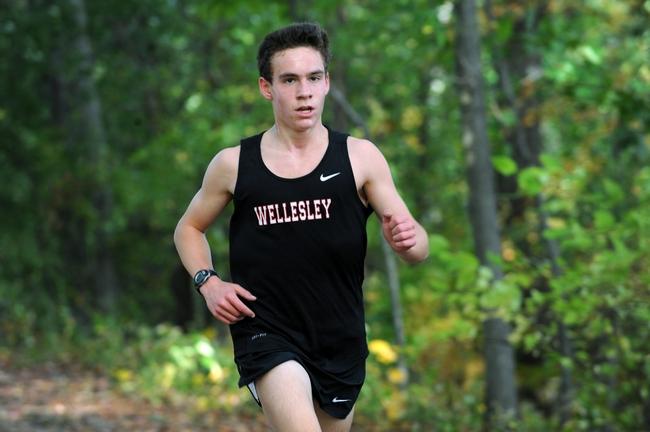 “He always supported the idea that ‘you’ve got to make it hurt’”, said D’Anieri, a junior at Wellesley High and third-year member of the Wellesley High boys varsity cross country team.

Freniere, who captained the team last year, always pushed his “no pain, no gain” mantra on D’Anieri. So much so that D’Anieri now hears those words in his head during every run.

“Fast times and pain go hand in hand, so in the middle of a race, when things hurt the most, the question you start to ask yourself is how good you really want to be,” D’Anieri said. “To me, when I ask myself that question of how much I want to put myself through, I tell myself to ‘make it hurt’.”

D’Anieri and his teammates had no choice but to push through the pain after losing a handful of runners to graduation, piecing together a 5-6 overall record this fall.
Wellesley High came in seventh out of 12 teams in the Bay State Conference championship meet on Oct. 25th. The team will have a chance to qualify for All-States at the Division 2 State Meet this Saturday.

But individually, D’Anieri was the top runner in the BSC winning the overall meet in 15:52, his best time this season to date. It is a mark that has him slightly flustered, but still content.

“It’s frustrating that I’m not as fast as last year in terms of time, but I’m happy that I haven’t been beaten yet this season,” D’Anieri said.

D’Anieri’s strength lies in his ability to control his tempo. While many runners burn themselves out at the beginning of a race, D’Anieri has mastered the art of pacing himself.

“I am able to hold back when the race starts at a pace no one can maintain and wait for the other runners to come back to me,” D’Anieri said.

D’Anieri has been running competitively for “as long as he can remember,” taking part in the Wellesley ‘Fun Run” and the summer track program in Needham before eventually joining the middle school and high school cross country teams in Wellesley.

“What I love most about cross country are long runs with the team,” D’Anieri said. “In track, people are more split up and there is a greater emphasis on workouts. Fall is the most beautiful season for running, and every run is more fun in cross country because everyone on the team is together doing the same thing.”

During the cross country season, D’Anieri has little time for anything besides cross country and his school work. Monday’s normally feature a light workout followed by some strength work. On Tuesdays and Thursdays, D’Anieri and company have relatively stress free 30-minute runs.

Wednesday is normally race day for the Raiders, and the week winds down with a difficult workout on Friday and a long run on Saturday before taking Sunday off.
“Cross country practice is usually one of the shortest team practices because there is not a lot of setup or standing around time, once you’ve done your run you can leave,” D’Anieri said. “That being said, junior year involves a lot of work that is tough to balance with sports.”

For a running enthusiast like D’Anieri, there really isn’t an offseason. When he isn’t running cross country, D’Anieri is a member of both the Wellesley High indoor and outdoor boys varsity track teams.

While there aren’t any team responsibilities in the summer, D’Anieri believes it is one of the most pivotal times for training.

“As we get ready for the cross country season, summer running often involves running twice a day and up to 80 miles each week, and is not absent from competition either as many of us run road races and other summer events to stay sharp,” D’Anieri said.

D’Anieri is planning to run competitively at the college level, be it cross country or track, but the junior isn’t close to making a decision on what school he will attend. He knows there is still a lot of work to be done.

“Our season isn’t over yet,” D’Anieri said. “The important races are still to come.”
“The Athlete of the Week has been sponsored for more than 25 years by Deland, Gibson Insurance in Wellesley”