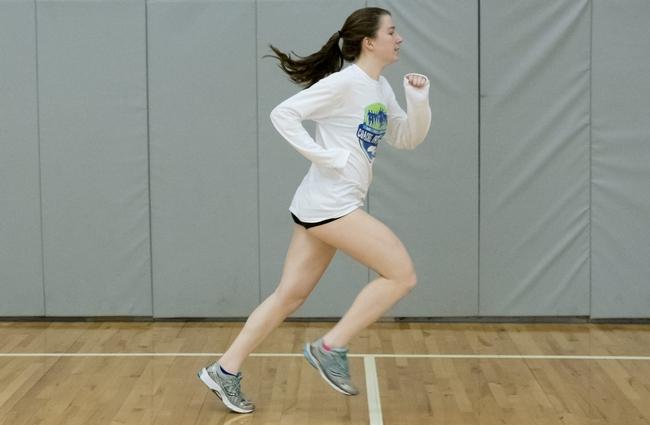 Still, the junior captain and third-year member of the Wellesley High girls indoor track team has jumped ahead of the pack to establish herself as an elite, do-it-all competitor for the Raiders.

Isley isn’t one to shy away from a challenge — or four of them. The talented team leader competes in the 55-meter dash, the long jump, the 4×200 relay and the 300.
“One of the things that makes me unique, just on my team, is a lot of the girls if they’re good are good at one event,” Isley said.

Isley’s versatility comes at a cost. While many athletes choose to specialize in their best event, Isley is — quite literally — running all over the place.
“It’s hard to compete in so many events and do as well in each event — obviously you’re tired and you’re running between events and stuff,” said Isley. “But I think that’s given me more experience with different parts of track, so I think that’s also made it a better experience.”

But as a fierce competitor, Isley is not satisfied with those numbers.

“In some events, yes I’m satisfied. Some events, no,” she said. “I think I definitely improved in my 200 (relay split) times and in my jumping.”

In the dash and 300, Isley feels her performances have suffered due to a lack of competition in those events from the rest of the Bay State Conference.

“I think it’s been hard, especially in stuff like the 300 and 55 during the regular season, because our Herget Division has lost a lot of the very competitive seniors from last year,” said Isley, “so it’s been hard to get those same times without the same level of competition.”

Isley’s individual performance has been crucial to Wellesley’s team success as the Raiders have gone a perfect 5-0 and captured the Herget Division championship with their win over Milton last week.

“I think our success is honestly just people coming back and being stronger every year, and being able to come back to the team and keep contributing and improve themselves as well,” said Isley.

Isley is the leader of an ultra-talented junior class for the Raiders, a group that has made steady improvements since their freshman year.
“My grade has been really strong in a bunch of different events ever since we’ve been freshmen,” Isley said. “I think that over time, we’ve gotten a lot stronger.”
As the ringleader, it’s Isley’s job to set an example for the rest of her teammates.
“You not only have to try your best, you also have to remain calm and project this image to the rest of your teammates and know what you’re doing,” said Isley. “For the most part, it’s a lot of fun.”

Much of her progress has taken place in the offseason. With little time for strength and conditioning during the season, Isley puts in the bulk of her work before the high school season.

“It’s just hard during the actual season to do a lot of weightlifting,” said Isley.
It’s a routine that Isley has become accustomed to as track has been a part of her life since middle school when she began running during the outdoor season in sixth grade.

Isley played other sports growing up, particularly basketball and softball, but after breaking her wrist several times playing basketball, she decided to focus solely on indoor track as her winter sport in high school.

Isley has even bigger goals for her senior season next year – making Nationals. Isley felt it was a “really cool” experience when she was part of the 4×200 relay that made Nationals last year.

“I’d really like to go to Nationals again, either as part of the relay or individually,” said Isley.

When it’s all over, Isley hopes that she and her teammates will be remembered for their grit.

“I feel like our grade has had a lot of strong, dedicated athletes who have improved so much by working hard and sticking with it,” said Isley, “and that’s the legacy we’ll leave behind.”