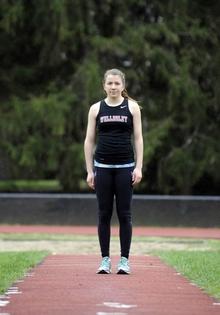 While basketball had a lot to offer, it was all the running involved in playing the sport that appealed to her the most.

“I’ve always played basketball, and I’ve always kind of liked the running aspect of that,” said Isley, a sophomore at Wellesley High. “I don’t play anymore, but I used to play. So I started running outdoor track in middle school in sixth grade, and I kind of just kept with it.”

Many of Isley’s friends joined the middle school outdoor track team in sixth grade so she decided to tag along, thinking it would be a fun experience. Once Isley reached high school, she opted to stay with track on the indoor and outdoor squads. It was a logical choice considering her parents both ran track in high school and her cousin was a member of the track team in college.

“A lot of people in my family have run,” said Isley. “It was something [/fusion_builder_column][fusion_builder_column type=”1_1″ background_position=”left top” background_color=”” border_size=”” border_color=”” border_style=”solid” spacing=”yes” background_image=”” background_repeat=”no-repeat” padding=”” margin_top=”0px” margin_bottom=”0px” class=”” id=”” animation_type=”” animation_speed=”0.3″ animation_direction=”left” hide_on_mobile=”no” center_content=”no” min_height=”none”][that] I knew about growing up and it was kind of a sport I was exposed to.

She has made track her year-round focus while also playing for the Wellesley girls junior varsity volleyball team in the fall. After a successful freshman year with the outdoor program that saw her notch a bevy of first place finishes — four in 100-meters, two in the 200, one in the triple jump, and six as a member of the 4×100 relay team, Isley has taken things to the next level as a sophomore.

With Isley leading the charge, Wellesley has gone 5-1 overall while achieving a perfect 5-0 record in the Bay State Conference Herget Division. She has continued to dominate her events, placing first in the 100 four times and coming in second twice. She has three first place finishes in the 200 and one second. She’s won the long jump three times, with one second, and has done the same in the triple jump as well.

“I think it has gone really well,” Isley said. “It’s gone better than our last season, because our big dual meet of the season is usually Natick, and we beat Natick, which was a huge victory and really exciting.”