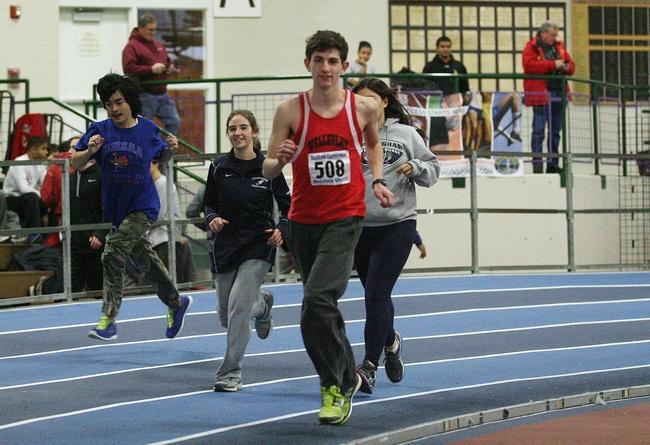 As a freshman, Griswold was one of the weaker runners on the Wellesley High boys cross country and track teams. He could have quit, but he decided not to let one year dictate his future.

“I decided track and cross country were sports I wanted to get good at so I put in a lot of summer mileage and it paid off,” said Griswold, now a senior. “I just enjoy running. I find it relaxing and when you run with a team you can spend the entire time talking to your friends.”

Relying on his work ethic more than natural ability, Griswold has come a long with his dedication to the sport and has molded himself into of the best runners on the varsity team.

“I ended up really loving it because it’s a sport where how hard you work – rather than just how much natural talent you have – really determines how well you perform,” Griswold said.

Griswold mainly runs the mile and 2-mile for the indoor team this winter, and occasionally participates in the 4×800 meter relay as well. His best time in the mile is 4:36, while his personal record in the 2-mile is 9:58.

“I like to think that track is just as much mental as it is physical,” he said. “Obviously you need the training and the fitness, but once a race starts, it’s just as much a mental battle as a physical one. I feel like I’m pretty good at staying focused during a race even when my body is hurting.”

Griswold’s individual achievements have bolstered the team’s overall success as well as the Raiders boast a 5-1 overall record this winter. Wellesley went 5-0 in the Bay State Conference’s Herget Division to capture the Herget title.

“On a small scale, track is an individual sport, but ultimately you win and lose as a team, so each individual really has the power to affect the outcome of a meet,” said Griswold.

Griswold also found a passion writing about his own sport and began contributing stories to the Wellesley Townsman about the Wellesley High cross country team, as well as the indoor and outdoor track squads, on a weekly basis during the season.
“I’ve written the track and cross country articles for the Townsman since sophomore year,” Griswold said. “I didn’t put too much thought into it at first.

I just figured it would be something worth trying, and I ended up enjoying it.”
Contributing stories added to an already busy schedule for Griswold as he spends his time juggling practice and schoolwork. He has practice every day during the week from 3 to 4:30 p.m. and for an hour on Saturdays.