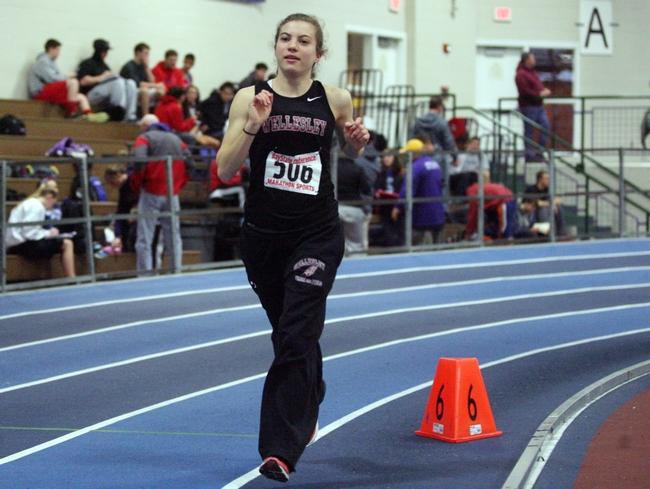 The senior captain of the Wellesley High girls indoor track team realizes she cannot control what others are doing around her so she directs her attention on her own performance.

“I always try to visualize the race and think positively before every competition,” said Ryan. “I try not to worry too much about the other people in my race. I just focus on my lane and what I need to do. I think not being afraid of how hard a race will be, and just getting out fast and just going for it is really important, and is something I am always working on.”

The approach has worked perfectly.

Additionally, Ryan has a personal best time of 7.60 seconds in the 55 dash — her other specialty — and was named a Bay State Conference All-Star following her sophomore season. Ryan’s success has continued in her senior season and she has helped the Raiders to a 4-1 record.

“I have been happy with both my team’s performance and my individual performance,” she said. “Individually, breaking the school record in the 300 has been one of my goals since sophomore year, so it was really exciting to finally get that time and see all my hard work pay off.”

For a zealous competitor like Ryan, track has proven to be the perfect sport. Her ability on the track is unquestioned and her work ethic is tireless, making her an ideal team captain, and she has earned the respect of her teammates because of it.
“I find that track is sport where you can really see your hard work pay off, which is one of the things I really like about it,” said Ryan. “My teammates are really encouraging, and while many people see track as an individual sport, there’s a big team component to it as well.”

“Emily leads by example,” said Wellesley girls coach John Griffith. “Even though her natural talent sets her apart from her fellow teammates, she still works harder than anyone else on the team.”

The hard works starts in practice, which takes place four to five times each week. Wellesley has meets every Thursday at the Reggie Lewis Center in Boston, with five dual meets taking place during the regular season, several Invitational and postseason meets as well.

“I love running and going to practice each day, so for me, track is a break and a release,” said Ryan, who also feels track has helped her in the classroom. “Since I have less time to do school work because of track, I think this makes me more focused when it comes time to study.”