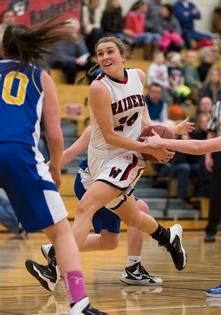 Entering the winter, the girls basketball program at Wellesley High was in flux. Glen Magpiong, who was previously the boys varsity coach, stepped in to be the new girls coach.

“If there was ever a time for a captain needing to step up and be a leader, it was this year, and (Jones) did,” Magpiong said.

Along with fellow senior captain Catherine McNamara, Jones was a stabilizing force for the Raiders in a year that started with a wave of uncertainty.
“We came into the season not knowing what to expect because we had a coaching change,” said Jones.

“(Jones) and (McNamara) held the dam together and eventually help fix it, all within a very short time frame,” Magpiong said. “Without their leadership, we would not have had near the success we enjoyed this year.”

Jones helped the Raiders to a 13-8 overall record and a berth in the state tournament. She was Wellesley’s leading scorer, averaging 9.5 points per game, and had a knack for long range shooting. Jones also averaged four rebounds, 1.5 assists, and a steal this season.

“Lexi had a terrific year both on the court and off of it,” Magpiong said. “Lexi was our leading scorer and 3-point shooter, but more importantly, she was the leader on the floor. Lexi worked tirelessly on both ends of the floor.”

Jones always felt her strength was playing defense, but she put a lot of work into improving her offensive game over the past two years as well.

“What makes Lexi unique on the court is her ability to always be talking,” said Magpiong. “I used to joke with the team that it was in Lexi’s DNA to talk on defense. It is hard to talk and play defense, and no matter how tired she might have been, she was always talking.”

Although the Raiders lost to Brockton (49-42) in the first round of the state tournament, Jones couldn’t be prouder of her teammates. In her eyes, everyone maximized their potential.

“As a team we worked so hard everyday in practice because we wanted to get better and we wanted to win,” Jones said. “I have never been on a team that can be so competitive with each other on the court but have such a strong bond off the court.”
Jones spent a lot of time on the court as a kid. Her older brother Mack, who is a captain for the Wellesley boys team, played a big role in developing her love of the game.

“He always made me rebound for him when he played in the driveway,” she said.
Her father, Ken, was her first basketball coach. He was a source of encouragement for her, and he emphasized the importance of the team over the individual.

“I love playing basketball because it’s a really fast-paced game so it’s never boring,” Jones said. “I’m also a very competitive person in general so playing basketball helps me channel my competitiveness into something productive.”
When she sets foot on the court, Jones’ goal is simple: play hard for 32 minutes.

“I try not to think too much when I’m on the court and instead, just react,” said Jones. “I’ve been playing basketball for a long time so, at this point, I just trust my instincts during games.”

After four years playing varsity sports at Wellesley High, Jones can certainly trust her instincts. Not only has she excelled on the court, she has been a stellar soccer and lacrosse player as well.

“I have absolutely no regrets,” she said. “I am so lucky to have had the opportunity to play for four varsity years in this program, the soccer program and lacrosse program.”

While some choose to focus on one sport, Jones doesn’t feel that’s a smart thing to do. She also would have never been able to pick which sport to play.

“I am really grateful for that indecisiveness,” said Jones. “Playing three sports has made me a better athlete than I would have been otherwise. I train differently for all three but my skills from one sport translate well to the others.”

Jones is committed to play basketball at Williams College next fall, and she might even find her way onto a lacrosse field there as well. But she knows her game will need some improvement to play at the collegiate level.

“I will definitely have to become a better shooter and ball handler because I’ll probably be smaller than most of my college competition,” she said. “It’s going to be faster and more physical but I’m very excited for this challenge and grateful for the opportunity.”

But one thing she won’t need to worry about is her leadership skills.
“One of the most important skills I’ve learned from playing basketball at Wellesley High is how to be a leader,” Jones said. “In my four years, I’ve had a lot of people to look up to who taught me that in order to be a leader both on and off the court I have to respect myself, respect others and make others respect me.”
“The Athlete of the Week has been sponsored for more than 25 years by Deland, Gibson Insurance in Wellesley”