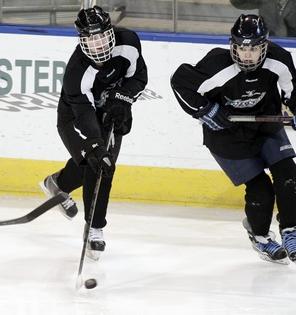 The junior at Wellesley High and a captain of the Raiders’ girls varsity ice hockey team doesn’t see the sport as simply a show of speed and strength, but views the rink as her easel, where she can create with her brush – a hockey stick.

“I love the creativity that goes along with hockey,” said Goss. “It’s a game that involves more thinking on your toes than memorizing plays and I think that makes the game really fun to play.”

Of course, Goss still does enjoy the speed of the game and the camaraderie it creates.

“I also love skating and how fast it makes the game,” she said. “There are so many great people and families involved with the programs. It has been a huge part of my life in that I’ve made some of my best friends playing, and it’s always fun to be on teams with your friends.”

But Goss’ journey on the ice didn’t start with her friends, it began with her family. She picked up the sport in the third grade when her dad signed her and her sister up for an all girls league, allowing her to join in on the tradition of hockey in her family.

“Both of our brothers played and my dad was a goalie in high school, so the sport sort of ran in the family,” said Goss. “I always loved skating in our front yard rink with my siblings and neighbors in the winter and playing street hockey in the summer, so I was excited to start playing when my dad brought it up.”

Goss joined the Wellesley High girls hockey team as a freshman and has been with the squad ever since. She recently completed her third season with the team, finishing with six goals and 17 assists for 23 points to help lead Wellesley to a 20-2-3 overall record and a berth into the state tournament.

The Raiders made the most of their postseason appearance, advancing all the way to the Division state championship game. Unfortunately, Wellesley suffered a heartbreaking 6-2 loss to Westwood in the final at TD Garden. Despite the setback, Goss called the experience “incredible”.

“It’s hard to go through an entire season and end up losing in a championship game and be left feeling completely satisfied, but I was really happy to play with and be part of such a great team,” said Goss. “Everyone worked hard to take the season literally as far as we could, and although we didn’t get the result we had hoped for, there’s no denying that everyone played as hard as they could in our last game. We were strong throughout the regular season and battled hard for some close wins in the tournament, and it was awesome to be a part of.”