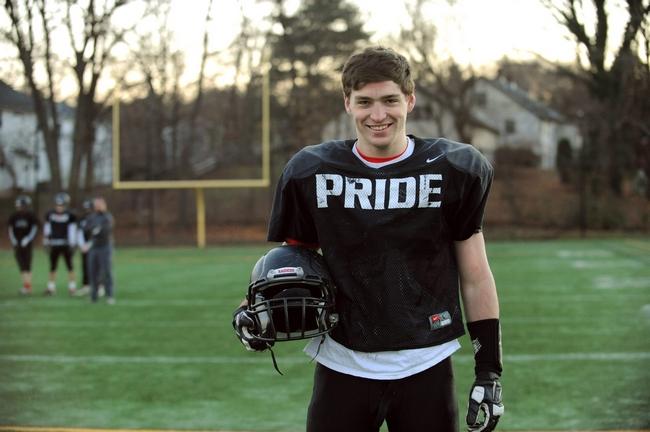 Senior captain Thomas Nocka has been a force on the offensive and defensive lines for the Wellesley football team this fall. WICKED LOCAL STAFF PHOTO / KATE FLOCK

Nocka grew up in the United States, but he moved to England when he was in the fifth grade. He returned home three years later, and that’s when he decided to give the game a try.

“I played rugby there and I had never played American football until my freshman year at Wellesley High,” said Nocka, now a senior and a captain of the Raiders’ varsity football team.

Many of the kids that play the game at the high school level have risen through the ranks from Pop Warner to their middle school teams, but Nocka wasn’t afforded the same luxury.

“When I first started playing, I sort of worried about that,” Nocka said. “When I started really playing, I realized that it didn’t really put me at a disadvantage, which is good.”

He may not have had a lifetime of football knowledge, but he did know a little something about rugby. The rules are quite different, and the pace of play bit more chaotic, but it helped him.

“Just the physical toughness,” Nocka said. “Rugby’s a big team game too, it isn’t one person running the ball around. It’s all about passing the ball back and forth and working as a team.”

Without knowing any better, Nocka began his career as a wide receiver and a corner back in his first season with the Raiders, but he quickly discovered that those positions weren’t for him.

“I was always a big kid, but I started playing as a corner back and a wide receiver,” Nocka said. “It just didn’t really fit me at all. My sophomore year, I transitioned to a lineman position.”

Now playing offensive tackle and defensive end, Nocka has finally found a home on the field.

Strictly a tackle on offense, Nocka and his teammates on the offensive line have become gifted communicators, allowing them to adapt to the constant shifts of an opposing defense.

On the opposite side of the ball, admittedly his favorite, Nocka has been a force this season.

Nocka has recorded 25 tackles — six of them for a loss — as well as four or five sacks and one pass swatted down, making him a valuable weapon for coach Jesse Davis.
“Thomas has really transformed himself in the offseason,” Davis said. “He is our best lineman up front. The work that he put in from January to August really made him stand out.”

Similar to last season, the Raiders opened the year with a string of four straight losses, but they have since righted the ship, responding with six consecutive wins to bring their record to 6-4.

Nocka and company will have a chance to make it seven straight victories to end the season when they face rival Needham in the 127th edition of the nation’s oldest public school rivalry on Thanksgiving morning.

“I’m hoping that we win and I play well and we play well as a team,” Nocka said. “Playing in front of the crowd, it’s like something that you can’t describe it in words.”

Seeking their second straight win over the Rockets on Thanksgiving Day, Nocka said the Raiders are preaching a message of offensive unity and variety, as well as strong team defense.

After he graduates, Nocka will play college football at Dickinson College in Carlisle, Pennsylvania. While playing football in college had been his dream, Nocka didn’t let that factor into his search.

“I was looking at it without football,” Nocka said. “I wanted to play football in college, but I wasn’t planning on applying to a school for football, but if the school I applied to had football and I really liked it, I’d try to play football there.

“Dickinson was my favorite school, and I talked to the coach, and that’s who helped me get in and I committed to play there.”

Nocka doesn’t anticipate the jump from high school to college football will be too hard to handle, but he knows he has work to do in the offseason to get bigger and better.

“If you put in the effort, you’ll be rewarded by how much effort you put in,” Nocka said. “I always work hard in the offseason, and that’s what’s helped me every single season get better and better, because I put the work in.”