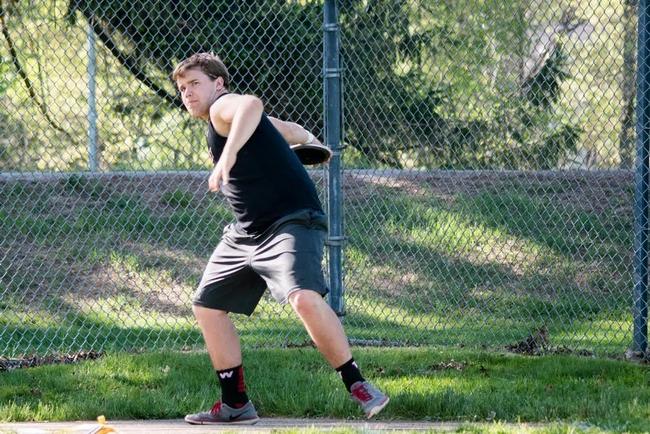 Wellesley senior William Perry excelled in the discus and was a state qualifier in the shot put this spring. (Wicked Local Staff Photo / Sam Goresh)

“What makes me different from the other kids on the team is my drive to succeed and to compete against the top throwers in and out of my division,” Perry said.

Wellesley went 3-2 on the season, thanks in part to Perry’s performance.

“I wish we had done better but it’s always nice when a team goes over .500,” said Perry.

Individually, Perry accomplished his biggest goal this season — qualifying for the Div. 2 state meet in the shot put — and he has another sport to thank for it.

“I feel playing football for the school gave me the strength and explosiveness to succeed in shot this season,” he said.

In the midst of a meet, Perry visualizes the task at hand. In his case, throwing as far as he can.
“When I visualize something I can usually achieve it,” said Perry.

Perry and his teammates have practice five times each week with a meet sandwiched in the middle of the week. In the offseason, he spends a good amount of time in the weight room.

“I like to lift to stay strong so I can compete with the best,” he said.

Perry has only one regret from his time on the track team at Wellesley High, and it’s that he wasn’t able to reach the 44-foot mark in shot put.

“I would have loved to achieve that goal,” Perry said, “but I am not crushed I didn’t because I still qualified for the Div. 2 meet.”

Next year, Perry will attend Quinnipiac University in Connecticut. Unfortunately, because they don’t have a varsity team, it will mark the end of the road for Perry’s days on the track.

Nevertheless, the lessons Perry learned from his track days will stay with him.

“From being a track captain I have learned a lot of leadership qualities that will help me succeed later in life and be great tools as I seek out a minor in management,” he said.