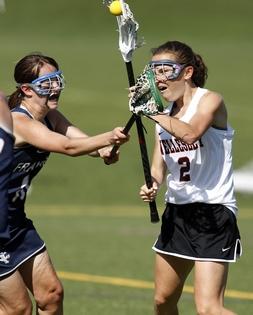 The freshman midfielder burst onto the scene this spring, using her talented offensive touch to score 52 goals and power the Raiders girls lacrosse team to their best season in years.

“I’m pretty pleased with that performance,” Chicoski said. “I mean, it’s all because of my teammates when they set me up.”

At 14-1-1, the Raiders are firing on all cylinders. Chicoski and her teammates have bought into what first-year coach Michelle Cook is selling, leaving it all on the field.

“Our team motto is ‘want it more’ and I think that really kind of describes our team’s attitude towards games,” said Chicoski. “We go out there and give 100 percent every game and we really want to win it more than the other team.”

“I am new to the program,” Cook said. “However, there are little things that I have seen improvements with Caitlin. She is very coachable and is hungry to learn and to push herself. I think she gained more knowledge of strategic aspects of the sport.”

Wellesley’s only loss came against Needham, one of the state’s top teams. The Raiders only lost by one goal, leaving Chicoski believing that they can make a run in the state tournament.

“I honestly think we could go pretty far in the tournament,” she said. “It just depends on what kind of game we bring.”

Chicoski’s game doesn’t leave any question marks. She plays the sport with fire.

“Her strengths are her speed and stick work,” said Cook. “She is able to run through defenders and make it look effortless. She has a lot of finesse.”

“I like to play the game at a fast tempo usually,” Chicoski said, “like fast-breaking it on the other team up the midfield, but then also slowing it down when I get to the attacking end so the midfield can have a break because we’ve had to sprint up and down the field.”

Of course, Chicoski’s game isn’t perfect. While her goal-scoring ability has far exceeded expectations, Chicoski knows the importance of focusing on the other phases.

“One thing that I try to do every game is get [/fusion_builder_column][fusion_builder_column type=”1_1″ background_position=”left top” background_color=”” border_size=”” border_color=”” border_style=”solid” spacing=”yes” background_image=”” background_repeat=”no-repeat” padding=”” margin_top=”0px” margin_bottom=”0px” class=”” id=”” animation_type=”” animation_speed=”0.3″ animation_direction=”left” hide_on_mobile=”no” center_content=”no” min_height=”none”][better] draw control because I’m on the circle,” said Chicoski, “and draw controls really control who has possession of the ball in the game and honestly who will win.”

“There are always things any athlete can work on,” Cook said. “Caitlin has plenty of time to learn and to grow.”

One of the biggest challenges for Chicoski has been her age. A first-year player on the varsity team, she was initially intimidated by the upperclassmen — but that didn’t last very long.

“They’ve been really inclusive and it was pretty tough at first playing against them,” she said, “but I’ve gotten better every day because of them, because they push me to become better.”

So far, Chicoski hasn’t let that potential roadblock get in her way.

“It’s actually been a great experience,” Chicoski said. “Being on the varsity team has helped me become friends with a lot of upperclassmen that I normally wouldn’t have been friends with and it’s also really helped me adjust to the new school, being friends with all those girls.”

After all, it isn’t a completely new experience. Chicoski has been playing the sports since the third grade, when her parents signed her up for the town lacrosse league to play with her friends.
“My parents just kind of signed me up, and I’m glad they did,” said Chicoski.

Lacrosse isn’t her only sport, though. Chicoski also plays soccer and basketball at Wellesley, and even though she’s only a year in, she has already noticed the benefits of playing multiple sports. Especially when it comes to lacrosse.

“For soccer, it’s mainly the field size and I get in shape running up and down the field in soccer, which is kind of the same motion as in lacrosse,” she said. “Basketball is very similar to lacrosse — cutting and movement — so it helps me prepare the season before lacrosse.”

She may be young, but Chicoski knows she wants to play lacrosse in college. In fact, she’s already begun the recruitment process. But that’s a ways off, and for now, Chicoski is focused on what she can do on the field.

“For my time in Wellesley, I really want to leave a lasting impact here,” Chicoski said. “I think the team’s record hasn’t been the best in the past, but I want to leave it in a good position when I go to college. I’m hoping that the program can really develop under coach Cook in the coming years and be a real threat in girls lacrosse.”

WICKED LOCAL STAFF PHOTO / MARSHALL WOLFF
This was reposted with the permission of The Wellesley Townsman.