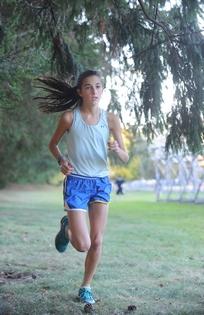 But Grace Rademacher doesn’t simply run cross country to kill time. She has embraced everything about the sport.

“I love cross country because I have found my passion in it,” said Rademacher, a freshman at Wellesley High School and a first-year member of the Wellesley girls varsity cross country team. “I enjoy every aspect of running cross country, and know that I won’t ever stop having fun with it. The captains and upperclassmen on the team have really helped the freshmen make the leap from middle to high school, giving us advice and being great leaders every day at practice.”

Rademacher started running cross country in the seventh grade, but it wasn’t until her eighth-grade season that she discovered how much she truly loved it. Upon joining the varsity cross country team at Wellesley this fall, Rademacher has discovered new challenges. The competition is much tougher, and that has forced Rademacher and her teammates to adjust on the fly.

“So far this season, we have raced very well even though we have been up against some stiff competition,” said Rademacher, who has helped guide the Raiders to a 7-3 record. “Every race presents new challenges like the weather, the opposing team and the course, but we have done a great job adjusting and performing to our best ability. Even though we have had some tough and tight races, I know that we are a strong team and can finish off the season at States this year.”

On an individual level, Rademacher has posted personal-best times of 19:40 in a 5-kilometer race, 15:25 in a 2.5-mile race, and 18:48 in a 3-mile race. She has impressively come in second place five times in dual meets so far this fall. Given her inexperience in the sport, Rademacher has recognized the importance of keeping her confidence level high.

“I know while racing that I cannot allow myself to get intimidated, whether it is by older and bigger runners on the other team or the daunting course,” she said. “I also remind myself that the pain of racing is only temporary, and giving up on myself in a race will let the team down.”

As her first season winds down, Rademacher still has a few more goals that she would like to accomplish. As a team, she hopes Wellesley can qualify for the MIAA Cross Country State Championship meet. She also hopes to run in the Foot Locker Northeast Regional, which takes place Nov. 30 at Van Cortland Park in the Bronx, New York.

“I know it will be a challenge,” she said, “but I would love to take advantage of the opportunity.”

Since she is only a freshman, Rademacher has plenty of time to accomplish her goals and make a name for herself at Wellesley, but she knows already that she would like to run cross country in college, and one day she might even want to coach the sport.