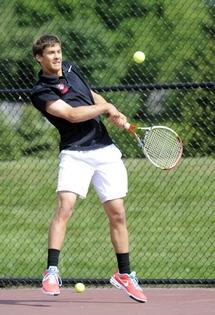 Rosen and fellow senior Michael Pioso, the Raiders’ returning number two player, faced off in a challenge match early in the spring. The winner would start the year at first singles.
In a third-set tiebreaker, Rosen lost the match — and his top spot.

“I just knew that if I kept my head up and kept a good attitude about it, I would get better as the season went along,” said Rosen.

Eventually, Rosen regained his spot at first singles and finished with an 8-3 overall record.
“He accepted his position and did as much as he could to help the team at that position,” said Wellesley High boys tennis coach Mike Sabin. “Then when he had a chance to regain the first singles position, he did so.”

Rosen’s initial stint at second singles proved to be a blessing in disguise for the Raiders, allowing them to match their best player against the opposition’s No. 2.

“Playing there, I felt I should win basically every single match,” said Rosen. “I actually kind of liked it because a lot of matches would come down to my point and that’s something I really enjoy.
“It definitely gave me an edge, like to prove that, regardless of who was playing one, that I was at that level.”

There wasn’t much of a drop off from Pioso to Rosen. Both are very talented players, and as it turned out, their spots in the lineup were interchangeable.

Near the end of the season, Rosen and Pioso met again for a second challenge match. This time, Rosen won in straight sets to take back the first singles spot.

Rosen never lacked confidence in his earlier days with the Raiders, but his ability to develop and adhere to a game plan didn’t take form until his latter years with the program.

As an underclassman, Rosen had to work his way up the roster. He played first doubles as a freshman then moved into the singles ladder before ascending to the top of the lineup.

There was never a point when Rosen lacked confidence in his abilities, but Sabin has watched him grow emotionally and become much more trusting of his choices on the court.

“He just has more confidence in what he’s doing on the court,” said Sabin. “He’s more self-assured.”
“All four years have been a ton of fun and I couldn’t have asked for a better group of kids to play with,” Rosen said.

For all the fun, there have been moments of heartbreak.

Rosen’s only regret on the court came in last season’s third round state tournament match against Barnstable. With the outcome hinging on his point, Rosen frittered away several match points to lose a close second set before dropping a 7-5 decision in the third.

Fortunately, Rosen may have a chance to make it right this postseason as the Raiders begin state tournament play on Thursday afternoon.

“We have a really good chance of playing them again and that’s kind of just fueled my fire for the playoffs this year,” said Rosen, “and I’m really looking forward to that.”

WICKED LOCAL STAFF PHOTO / SAM GORESH
This was reposted with the permission of The Wellesley Townsman.