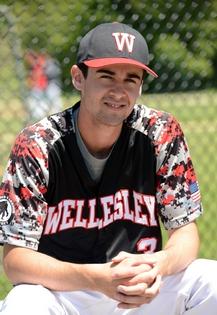 None of that applied to Nir Liebenthal, who spent the early years of his life living in Israel.

“No. Nothing,” he said. “My family didn’t know anything. None of us knew anything about it.”

Much like the United States, baseball was a foreign concept to Liebenthal when he was growing up. At age 9, that all changed when Liebenthal and his family moved to Milwaukee.

Liebenthal may not have known the game, but he liked playing sports, so he gave it a try.

“I ended up really liking it,” said Liebenthal, who graduated from Wellesley High this spring.

From the outside looking in, it would appear that Liebenthal’s late start would delay his growth on the diamond, but that wasn’t the case — he laced up his cleats and hit the ground running.

“I felt like I picked it right up easily,” said Liebenthal. “We lived in Milwaukee at that point, so I became a big Brewers fan. It was pretty easy for me to pick up when I started playing.”

The work of Liebenthal’s father as a medical engineer caused his family to be on the move constantly. After Milwaukee, Liebenthal would reside in Canada before landing in Wellesley.

Liebenthal was eager to get back on the field, so he immediately joined the baseball team at Wellesley High when he first arrived as a sophomore. From there, it would only get better.

Two years of hard work culminated in an unforgettable sendoff for Liebenthal and company.

Liebenthal and the Raiders turned a historic season, finishing with a school-record 17 wins, a Bay State Conference Herget Division championship, and a No. 1 seed in the state tournament.

As for Liebenthal, he was undefeated on the mound, going 5-0 with a blistering 1.13 ERA.

“This was definitely my best year,” said Liebenthal, a captain, who also struck out 57 batters, “and I felt like I put a lot of time and preparation into this year, making sure I was ready.”

Wellesley High’s wild ride came to an end after a heartbreaking 8-7 loss to New Bedford — which ended with Liebenthal’s bases-loaded bunt — in the Division 1 South Sectional semifinal.

“This year was, as a team, unlike any other team I’ve been on,” Liebenthal said. “We came really close and we went on a great run there. We kind of had a great bunch.

“Even though we exited earlier than we wanted in the playoffs, I still look back on it and look at it as a great year, where we did great … I’m pretty happy with how it went.”