We at DG strive to honor our core values; in this case it is Leading Edge Knowledge.  With that said, We are bringing you up-to-date information on changes to the Flood Reform Bill:

Once again the flood insurance world is changing. The Briggert-Waters Flood Insurance Reform Act of 2012 was overshadowed  when first implemented as the Affordable Care Act and a Government shut down took over all major media headlines. Since then this bill has moved forward and is severely impacting constituents living in or around flood prone areas. It has finally come to forefront as large price increases are affecting the ability of people to pay their bills. An indirect result is also the loss in value to the homes, as flood insurance policies are beginning to be a much larger line item in the budget, with the costs rising as high as 25% each year. Congress has now officially voted to delay parts of the bill, fulfilling their promise to do so when the government was shut down back in October of 2013.

As we previously reported in our October 30th Blog: Flood Insurance: UPDATE, the changes to the bill would help “primary, non-repetitive loss residences”. Most large increases are going to be delayed until a government affordability study can take place. This will most likely move deadlines of sharp increases back at least 2 years (maybe even 4) – but this is a moving target depending on how long it will take the government to get this accomplished.

Most consumers can now take a deep breath but there will still be pricing increases, just not as dramatic – for the time being.

Below is a graphic from the Federal Government showing an example of premiums and how they are changing with the new non-subsidized rates versus the original PRE-FIRM rates: 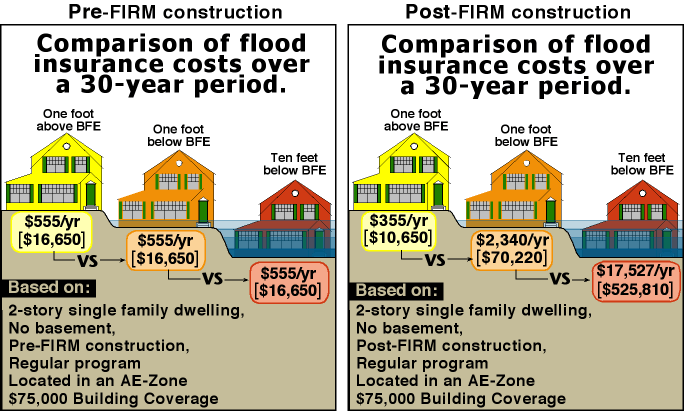 Please inquire with Deland, Gibson for more information about your flood insurance policy and how you may be affected, or if you would be interested in purchasing flood insurance to protect your property.